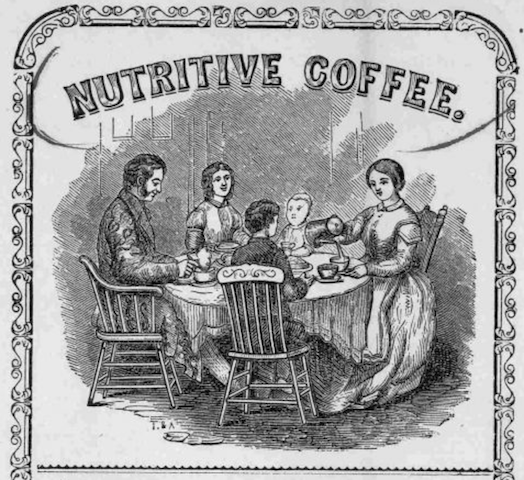 Coffee Substitutes. The love of coffee is an acquired taste. Perhaps nine tenths of the families using it ‘burn’ it almost to a coal, so that, in reality, any other burnt bitter would answer quite as well. In fact, multitudes in the far West, removed from markets, have become accustomed to use burnt bread-crust as a substitute…

The following substitutes for coffee have been collected, in all of which it is suggested, first, that the substitute be mixed with the genuine article, half-and-half; second, that in order to know what you are really drinking, roast and grind your own coffee. In this way only can you know that you are not imposed upon, or may not be drinking some cheap material, either filthy or poisonous…

Rye Coffee… Take some rye; first, scald it; second, dry it; third, brown it, and then mix it with one third coffee and two thirds rye, and then you will have as good a cup of coffee as you ever drank.

Sweet-Potato Coffee. – Take sweet potatoes, cut them fine enough to dry conveniently, and when dried, grind in a coffee-mill; dry them by the fire or stove, at this season of the year, or by the sun, when that will do it; grind and use one and a half tea-cupfuls for six persons, or mixed with coffee in such proportions as you like. Some omit half of the coffee, some more.

Barley Coffee. – Take common barley, or the skinless, if it can be obtained, roast as you would coffee, and mix in such proportion as suits your taste. It is very good.

Pea Coffee. – It is probably known to many that a very large per cent of the ground coffee sold at the stores is common field-peas, roasted and ground with the coffee. There are hundreds of thousands of bushels of peas annually used for that purpose. Those who are in the habit of purchasing ground coffee can do better to buy their own peas, burn and grind them, and mix to suit themselves.

Carrot Coffee… Cut up, dry and grind, and mix with coffee in quantities to suit the taste.

Chicory Coffee. – Equal weights of chicory and coffee, dried and roasted in the usual manner. The chicory root is raised as easily as carrots, and in exactly the same manner. To prepare the root, wash it clean, slice it lengthwise in four to six pieces, according to size, cut in two-inch lengths, dry and keep in a dry place until wanted. Chicory is largely used to adulterate coffee…

Don’t pretend you’ve never run out of coffee and tried to drink burnt bread-crust juice instead. 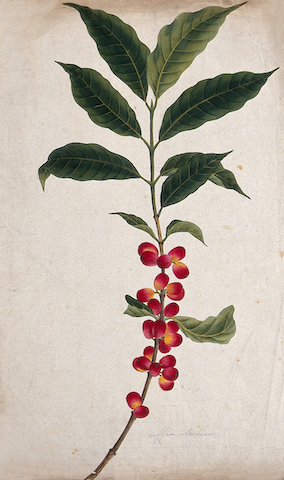 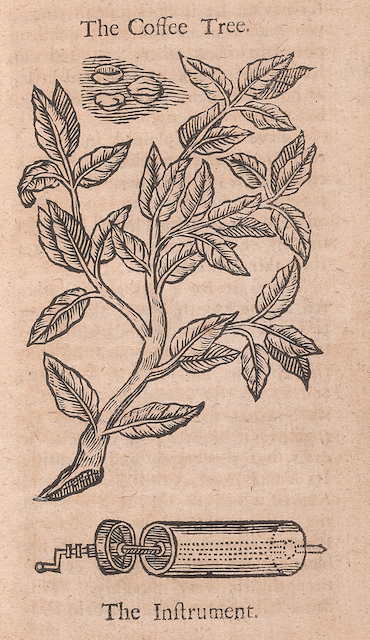